Home • “The Orthodox Corruption of Scripture” by Bart D. Ehrman 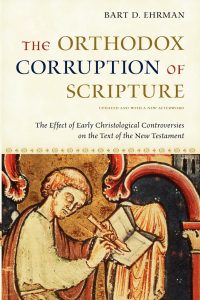 The Orthodox Corruption of Scripture. The Effect of Early Christological Controversies on the Text of the New Testament
by Bart D. Ehrman
Oxford University Press

«This is a book about texts and their transmission, about the words of the emerging New Testament and how they came to be changed by scribes of the early Christian centuries. My thesis can be stated simply: scribes occasionally altered the words of their sacred texts to make them more patently orthodox and to prevent their misuse by Christians who espoused aberrant views.

Textual critics are commonly charged—not always unfairly and often from among their own ranks—with disregarding research done in other fields. Narrowly focusing on the manuscripts of the New Testament, they often neglect the realia of ecclesiastical and social history that can elucidate features of the text. And restricting their theoretical field of vision to methods espoused by philology and biblical higher criticism, they bypass important foundational questions, such as what it might mean to refer to the “corruption” of a text that is offhandedly called the “original.”

If these charges are leveled against the present study, it will have failed in one of its principal designs. To some extent, the study is meant to dispel the notion that New Testament textual criticism is at best an arcane, if rudimentarily necessary, discipline, of little interest to the enterprises of exegesis, the history of theology, and the social history of early Christianity—let alone to broader interests of scholars in the humanities, such as the history of late antiquity, the use of literature in religious polemics, and the construal of texts.

To be sure,the explicit goal of the study is itself traditional. I am interested in seeing how scribes modified the words of Scripture they inherited. The methods I use to attain this goal are also traditional: they are the critical procedures customarily used to establish any text, classical or biblical. But I am less concerned with interpreting the words of the New Testament as they came from the pens of its authors than with seeing how these words came to be altered in the course of their transcription. Moreover, my understanding of this process of transmission, that is, the way I conceptualize scribal alterations of a text, derives less from traditional categories of philology than from recent developments in the field of literary theory.

In Chapter 1 I sketch the sociohistorical context for the phenomenon I will call, and justify calling, the “orthodox corruption of Scripture.” Here I deal with the theological debates of the second and third Christian centuries, a period of intense rivalry among various groups of Christians who advocated divergent ways of understanding their religion. By the fourth century, one of these groups had routed the opposition, co-opting for itself the designation “orthodoxy” and effectively marginalizing the rival parties as “heresies.” Proponents of fourth-century orthodoxy insisted on the antiquity of their views and embraced certain authors of the preceding generations as their own theological forebears. My study focuses on these earlier Christians—the representatives of an “incipient orthodoxy”—because most scribal alterations of the New Testament text originated during the time of their disputes, that is, in the ante-Nicene age.

In particular, this chapter explores the ways proto-orthodox Christians used literature in their early struggles for dominance, as they produced polemical treatises, forged supporting documents under the names of earlier authorities, collected apostolic works into an authoritative canon, and insisted on certain hermeneutical principles for the interpretation of these works. The documents of this new canon could be circulated, of course, only to the extent that they were copied. And they were copied by warm-blooded scribes who were intimately familiar with the debates over doctrine that made their scribal labors a desideratum. It was within this milieu of controversy that scribes sometimes changed their scriptural texts to make them say what they were already known to mean. In the technical parlance of textual criticism—which I retain for its significant ironies—these scribes “corrupted” their texts for theological reasons. Chapter 1 concludes with a proposed theoretical framework for understanding this kind of scribal activity.

The bulk of the study examines the textual tradition of the New Testament for variant readings that appear to have been generated within the context of orthodox polemics, specifically in the area of Christology. Using rubrics provided by the orthodox heresiologists themselves, I devote each of three chapters to a different christological “heresy” of the period: adoptionism, the view that Christ was a man, but not God; docetism, the view that he was God, but not a man; and separationism, the view that the divine Christ and the human Jesus were distinct beings. Each chapter describes the heresy in question (at least as understood by its orthodox opponents), before discussing textual variants that appear to have been created out of opposition to it. In some instances this requires extensive text-critical argumentation to distinguish the earliest form of the text from modifications effected during the course of its transmission. I have provided a proportionately greater treatment to variants of special interest to New Testament exegesis, the development of Christian doctrine, and the history of interpretation. A much briefer fifth chapter considers textual variants that appear to have arisen in opposition to the patripassianist Christologies of the late second and early third centuries. Chapter 6 summarizes my methodological and material conclusions, and proffers some suggestions concerning the significance of the study for understanding the debates between heresy and orthodoxy in early Christianity.

Because this book is intended not only for textual scholars but also for a variety of persons who might find the issues it raises of some relevance to their own academic interests, I suggest two different strategies of reading. For those who are not specialists in the text or interpretation of the New Testament, who are primarily interested in such things as the history of early Christianity, the development of religious polemics, or the effects of texts on readers, I suggest reading Chapter 1, the introductory and concluding sections of each of the main chapters, and the conclusion (Chapter 6). These portions of the book are relatively free from technical jargon; together they set the theoretical framework and historical context of the study, explain in greater detail my overarching thesis, describe the kinds of data I have used to establish this thesis, summarize the conclusions that I think we can draw from these data, and reflect on the broader significance of these conclusions for textual critics, exegetes, theologians, and historians of late antiquity. On the other hand, textual scholars and exegetes who are interested in examining the evidence and evaluating the arguments I have adduced will want to read the detailed exposition of each chapter. It is here that I address a number of textual and exegetical issues that have intrigued scholars throughout the modern era, and demonstrate on a case-by-case basis how proto-orthodox scribes of the second and third centuries modified their texts of Scripture to make them conform more closely with their own christological beliefs, effecting thereby the “orthodox corruption of Scripture.”»