Home • “The Myth of Artificial Intelligence Why Computers Can’t Think the Way We Do” by Erik J. Larson 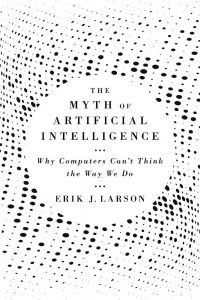 The Myth of Artificial Intelligence Why Computers Can’t Think the Way We Do
by Erik J. Larson
Harvard University Press

«In the pages of this book you will read about the myth of artificial intelligence. The myth is not that true AI is possible. As to that, the future of AI is a scientific unknown. The myth of artificial intelligence is that its arrival is inevitable, and only a matter of time—that we have already embarked on the path that will lead to human-level AI, and then superintelligence. We have not. The path exists only in our imaginations. Yet the inevitability of AI is so ingrained in popular discussion—promoted by media pundits, thought leaders like Elon Musk, and even many AI scientists (though certainly not all)—that arguing against it is often taken as a form of Luddism, or at the very least a shortsighted view of the future of technology and a dangerous failure to prepare for a world of intelligent machines.

As I will show, the science of AI has uncovered a very large mystery at the heart of intelligence, which no one currently has a clue how to solve. Proponents of AI have huge incentives to minimize its known limitations. After all, AI is big business, and it’s increasingly dominant in culture. Yet the possibilities for future AI systems are limited by what we currently know about the nature of intelligence, whether we like it or not. And here we should say it directly: all evidence suggests that human and machine intelligence are radically diferent. The myth of AI insists that the differences are only temporary, and that more powerful systems will eventually erase them. Futurists like Ray Kurzweil and philosopher Nick Bostrom, prominent purveyors of the myth, talk not only as if human-level AI were inevitable, but as if, soon after its arrival, superintelligent machines would leave us far behind.

This book explains two important aspects of the AI myth, one scientific and one cultural. The scientific part of the myth assumes that we need only keep “chipping away” at the challenge of general intelligence by making progress on narrow feats of intelligence, like playing games or recognizing images. This is a profound mistake: success on narrow applications gets us not one step closer to general intelligence. The inferences that systems require for general intelligence—to read a newspaper, or hold a basic conversation, or become a helpmeet like Rosie the Robot in The Jetsons—cannot be programmed, learned, or engineered with our current knowledge of AI. As we successfully apply simpler, narrow versions of intelligence that benefit from faster computers and lots of data, we are not making incremental progress, but rather picking low-hanging fruit. The jump to general “common sense” is completely diferent, and there’s no known path from the one to the other. No algorithm exists for general intelligence. And we have good reason to be skeptical that such an algorithm will emerge through further efforts on deep learning systems or any other approach popular today. Much more likely, it will require a major scientific breakthrough, and no one currently has the slightest idea what such a breakthrough would even look like, let alone the details of getting to it.

Mythology about AI is bad, then, because it covers up a scientific mystery in endless talk of ongoing progress. The myth props up belief in inevitable success, but genuine respect for science should bring us back to the drawing board. This brings us to the second subject of these pages: the cultural consequences of the myth. Pursuing the myth is not a good way to follow “the smart money,” or even a neutral stance. It is bad for science, and it is bad for us. Why? One reason is that we are unlikely to get innovation if we choose to ignore a core mystery rather than face up to it. A healthy culture for innovation emphasizes exploring unknowns, not hyping extensions of existing methods—especially when these methods have been shown to be inadequate to take us much further. Mythology about inevitable success in AI tends to extinguish the very culture of invention necessary for real progress—with or without human-level AI. The myth also encourages resignation to the creep of a machine-land, where genuine invention is sidelined in favor of futuristic talk advocating current approaches, often from entrenched interests.

Who should read this book? Certainly, anyone should who is excited about AI but wonders why it is always ten or twenty years away. There is a scientific reason for this, which I explain. You should also read this book if you think AI’s advance toward superintelligence is inevitable and worry about what to do when it arrives. While I cannot prove that AI overlords will not one day appear, I can give you reason to seriously discount the prospects of that scenario. Most generally, you should read this book if you are simply curious yet confused about the widespread hype surrounding AI in our society. I will explain the origins of the myth of AI, what we know and don’t know about the prospects of actually achieving human-level AI, and why we need to better appreciate the only true intelligence we know—our own.

In this book
In Part One, The Simplified World, I explain how our AI culture has simplified ideas about people, while expanding ideas about technology. This began with AI’s founder, Alan Turing, and involved understandable but unfortunate simplifications I call “intelligence errors.” Initial errors were magnified into an ideology by Turing’s friend and statistician, I. J. Good, who introduced the idea of “ultraintelligence” as the predictable result once human-level AI had been achieved. Between Turing and Good, we see the modern myth of AI take shape. Its development has landed us in an era of what I call technological kitsch—cheap imitations of deeper ideas that cut off intelligent engagement and weaken our culture. Kitsch tells us how to think and how to feel. The purveyors of kitsch benefit, while the consumers of kitsch experience a loss. They—we—end up in a shallow world.

In Part Two, The Problem of Inference, I argue that the only type of inference—thinking, in other words—that will work for humanlevel AI (or anything even close to it) is the one we don’t have a clue how to program or engineer. The problem of inference goes to the heart of the AI debate because it deals directly with intelligence, in people or machines. Our knowledge of the various types of inference dates back to Aristotle and other ancient Greeks, and has been developed in the fields of logic and mathematics. Inference is already described using formal, symbolic systems like computer programs, so a very clear view of the project of engineering intelligence can be gained by exploring inference. There are three types. Classic AI explored one (deduction), modern AI explores another (induction). The third type (abduction) makes for general intelligence, and, surprise, no one is working on it—at all. Finally, since each type of inference is distinct—meaning, one type cannot be reduced to another—we know that failure to build AI systems using the type of inference undergirding general intelligence will result in failure to make progress toward artificial general intelligence, or AGI.

In Part Three, The Future of the Myth, I argue that the myth has very bad consequences if taken seriously, because it subverts science. In particular, it erodes a culture of human intelligence and invention, which is necessary for the very breakthroughs we will need to understand our own future. Data science (the application of AI to “big data”) is at best a prosthetic for human ingenuity, which if used correctly can help us deal with our modern “data deluge.” If used as a replacement for individual intelligence, it tends to chew up investment without delivering results. I explain, in particular, how the myth has negatively affected research in neuroscience, among other recent scientific pursuits. The price we are paying for the myth is too high. Since we have no good scientific reason to believe the myth is true, and every reason to reject it for the purpose of our own future flourishing, we need to radically rethink the discussion about AI.»