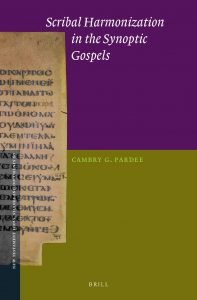 Scribes in the Ancient World
«In the earliest centuries of Christianity, as the texts of the New Testament were written, dispersed, and read, scribes living throughout the Mediterranean world were entrusted with the task of copying documents that were, or would come to be, sacred. This book takes as its subject these scriveners, the artifacts they created, and the dynamic role of copyists in the transmission of the Greek manuscripts of the Synoptic Gospels.

Introduction to Scribal Harmonization
No ancient manuscript is an exact copy of the exemplar from which it was transcribed. As scribes copied, they made mistakes. They added and omitted words by intention and by accident, they made modifications to suit their stylistic expectations or theological convictions, and sometimes they made alterations on the basis of their knowledge of different versions of the material they were copying. Scholarship in previous centuries regarded these “variant readings,” “variants,” or simply “readings,” as corruptions of the New Testament text and identified them only to expunge them. Eldon Jay Epp describes this procedure as a bleak vista where “variants are relegated to the netherworld at the foot of the pages in a critical edition, where they become, at best, second-class citizens, mostly overlooked and often without a further life.” They are “dead variants” extracted from “lifeless, artefactual manuscripts.” More recently, Epp, Bart D. Ehrman, D.C. Parker, and other contemporary textual critics have come to regard these scribal creations as evidence that can be used to elucidate a scribe’s socio-historical and theological context. Ehrman writes, “The New Testament manuscripts can thus serve as a window into the social world of early Christianity.” The variants tell stories, if one is attuned to listen. This style of “narrative” textual criticism breathes new life into dried bones. Each individual scribe manifested copying habits characteristic of his education and training, his level of care in executing his task, his assumptions about the content of the texts and their meanings, and myriad other factors. One prevalent scribal habit associated with the transmission of the first three books of the New Testament is the tendency of scribes to alter their texts of a Gospel in ways that reflect parallel material in another Gospel. This habit is known as harmonization.

Scribal harmonization, sometimes called assimilation, is prominent in the manuscript tradition of the Synoptic Gospels—Mark, Matthew, and Luke— due to the overlapping content and stylistic similarity of these three texts. Harmonization occurs in the Synoptics whenever a scribe copying the text of a particular Gospel alters his exemplar in a way, either by substitution, addition, omission, or transposition, that reflects parallel material or reduces discrepancies between the passage at hand and a parallel passage in one of the other Gospels. In the field of textual criticism, this practice is usually listed as one of the routine errors made by scribes and is included under the heading of “transcriptional probabilities,” that is, readings that are the product of the scribe rather than the author.

Take, for example, the pericope wherein Jesus redefines the nature of his true family (Mark 3:31–35//Matthew 12:46–50//Luke 8:19–21). In the Markan episode, Jesus’s mother, brothers, and possibly his sisters come to Jesus while he is teaching in a house. When they are unable to reach him, they are forced to send a message to Jesus by way of the crowd. Upon hearing the message, Jesus responds to “them” (αὐτοῖς), that is, to the crowd, with a rhetorical question: Who are my mother and my brothers? Jesus’s true family, he explains, are those who “do the will of God.”

Both Matthew and Luke include this episode in their own Gospels, but the plot is somewhat different, reflecting their own narrative aims. While Luke, on the one hand, tells the story with different words, the general storyline is the same: Jesus’s mother and brothers are unable to reach him, a message is relayed to him, and Jesus responds to “them” (αὐτούς), the group, with a new definition of family. Matthew’s version of this episode, on the other hand, largely mirrors Markan style and syntax, but the plot is different in a substantial way. Instead of the crowd or a collection of people relaying the message from Jesus’s family, it is one individual from among those listening to him who delivers the news (cf. Matthew 12:47). Jesus responds, not to the crowd, as was the case in Mark and Luke, but directly “to the one speaking to him” (τῷ λέγοντι αὐτῷ).

Turning to the manuscripts, there are a number of scribal alterations to the pericope in each of the Gospels, but only one that substantially alters the narrative of Luke. In P75, a third-century papyrus manuscript generally regarded as a trustworthy text, there is a variant reading in Luke 8:21 that probably reflects the influence of Matthew’s narrative on the scribe. In P75, when Jesus hears the message that his mother and brothers are standing outside, instead of answering “them” (i.e. the crowd who delivered the message), Jesus answers “him” (ἀυτόν)—an anonymous, male individual who is not introduced in Luke’s narrative and who does not speak or deliver the message. This figure appears to be a shadow of “the one speaking to him” from Matthew. The scribe, while copying the text of Luke, seems to have recalled Matthew’s version of events and has consequently introduced an assimilating variant into his copy of Luke, even at the cost of narrative continuity.

As this example demonstrates, it must be kept in mind from the start that even the most careful scribe occasionally made mistakes or introduced foreign material, sometimes as a result of negligence and other times as a result of fatigue or a flagging mind. We do well to heed E.C. Colwell’s apt observation: “Scribes do not automatically, as scribes, copy accurately.” Therefore, because scribes cannot be expected to have copied a text perfectly in every instance, one cannot ignore the role of scribes in duplicating documents as one nowadays ignores the part played by electronic printers and Xerox machines. The scribes are by no means standing silently in the distant history of the text—their presence is inked across countless fragments of papyrus, sheaves of vellum and parchment codices, and the pages of every modern edition of the Bible.»