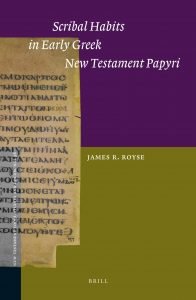 «One of the crucial principles of Hort’s masterly survey of the materials, methodology, and results of New Testament textual criticism is: “Knowledge of documents should precede final judgement upon readings.” As Hort’s own comments make clear, knowledge of the sorts of errors that a particular scribe tended to make, and of his overall method and accuracy of copying, is an essential portion of this “knowledge of documents.” Accordingly, one finds in Hort’s work and in the works of other critics various assertions concerning the copying habits of scribes of significant manuscripts. Not only Greek manuscripts, of course, but also the versions and the Fathers may be studied from this same perspective.4 Similarly, the habits of Church Fathers in citing Scripture should be known as a prerequisite for the careful use of Patristic evidence.Naturally, the dominant significance of the continuous-text Greek manuscript evidence for the New Testament gives the study of the habits of the scribes of these manuscripts (and particularly of the major manuscripts) a corresponding prominence.

For example, both Hort and von Soden provide data on the copying techniques of the scribes of B and ℵ, and utilize these data to justify certain conclusions about the value of the readings found in these manuscripts. Many other such observations are scattered throughout the literature. For example, for Acts in particular, Ropes provides brief but instructive comments on the scribes and scribal errors of B, ℵ, A, and D. Codex Bezae has, of course, received much attention, including the detailed study of its scribal habits in Acts by Weiss. The potential value of such observations for Codex Bezae (and by implication for other witnesses) is well summarized by Scrivener:

putting aside the case of mere errors of the scribe, I do think that the admitted corruptions and deliberate interpolations which we all recognize in the Codex Bezae, have a natural tendency to detract from the credibility of its testimony in more doubtful cases.

And there are also many miscellaneous remarks scattered about the literature, among which are some interesting comments by Hoskier on the scribe of B. For example, he says:

In the first place we do not believe that the scribe of B was a Christian. He seems to have been more or less a Western Unitarian. The scribes of ℵ and B were men of entirely different character. That of ℵ was a critic, and interested (too interested) in his work. He of B was quite uninterested in his work, and gives evidence of being a professional penman too ready to follow marks here and there indicating omissions or changes without consulting better authorities.

And elsewhere Hoskier refers to B’s reading κρηματα for κτηματα at Matt 19:22 (supported only by Clement), and says:

In other words “money” to B or the scribe of B was more familiar (χρήματ᾽ ἀνήρ “money makes the man”, Pindar) than landed possessions. Bscribe was a city man, a town man, as is seen all through his attitude.

Further, as we shall see in detail in chapters 4–9, numerous scholars have attempted to characterize the habits of the scribes of the most important of the papyri. Unfortunately, however, the comments found in the works of Hort, von Soden, and others, appear usually to be based upon data that are incomplete and that have not been selected by means of a carefully formulated and implemented methodology. One consequence is that critics differ ab initio on the value to be ascribed to the various manuscripts, and even where they agree it is not clear what the evidence supporting the common position really is.

This lack of evidence is seen most clearly when one moves to the next level of generalization, namely, from the habits of the scribes of particular manuscripts to the determination of the habits of scribes in general. These general habits are presumably discovered, of course, on the basis of a detailed knowledge of the specific habits attributed to the scribes of some sample of the extant manuscripts. The general habits serve, then, as the basis of our knowledge of transcriptional probability (and improbability): what sorts of alterations scribes are likely (or unlikely) to have made in the text. Finally, this knowledge permits us to formulate the several canons of internal evidence, which are found in various textbooks and prolegomena, and which are an essential tool in the critic’s task of reconstructing the history of the text of the New Testament.»