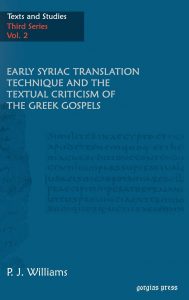 «This work has two main aims: positively, to formulate new guidelines about the use of Syriac witnesses to attest Greek variants, and negatively, to show that early Syriac witnesses of the Gospels do not support many of the Greek variants they have been claimed to support. These aims are intimately connected. In its negative aim the monograph is almost certainly less original than in its positive one. Careful scholars have, after all, long been cautious about any piece of versional information given in a critical apparatus; it is simply a suggestion to be checked. However, the small community of scholars able to make a truly independent assessment of the validity of a Syriac entry in an apparatus has expended relatively little effort in developing and refining precise rules for the use of Syriac versions. It is hoped that the following pages can make a positive contribution in this regard.

It will be argued in what follows that, whereas critical editions of the Greek New Testament confidently cite Syriac witnesses on behalf of this or that Greek variant, the Syriac evidence is often more ambiguous. Consequently, some Syriac witnesses need henceforth to disappear from the discussion of a significant number of disputed texts. The particular witnesses with regard to which this claim is made are the Old Syriac (OS) manuscripts Sinaiticus (S) and Curetonianus (C), and to a lesser extent the Peshitta (P). Since Syriac Bible translations become progressively more literal through the centuries, the uncertainties that accompany studies on the Vorlage of the Old Syriac texts diminish as one approaches the Peshitta, and are drastically reduced on reaching the Harclean text of the Gospels. The Harclean text is therefore left entirely out of consideration in the pages that follow.

In contemplating the Vorlage of the text of any ancient Bible translation there are basically three major types of hypothesis that present themselves. The first is the hypothesis that the translation is essentially a literal representation of its Vorlage, the second, that formal alterations were made in the process of translation, and the third, that alterations were made in the process of transmission of the translated text to us. We may call these the Vorlage Hypothesis, Translation Hypothesis, and Transmission Hypothesis, respectively. In no sense are these three hypotheses mutually exclusive, and one often has recourse to more than one of them simultaneously.

What is at question is the relative frequency with which one should invoke each hypothesis. It is contended here that the Vorlage Hypothesis has been used too much and the Translation Hypothesis explored too little. The Transmission Hypothesis—the possibility of change during transmission—needs to be considered carefully, but is not frequently invoked here since all the Syriac texts studied are extant in exemplars dating from the sixth century or earlier. The relatively short period between composition and our extant manuscripts is moderately favourable to an optimistic view of our access to the original translation.

However, the relationship between translation and transmission needs to be clearly defined. S and C give the impression that they have a complex textual prehistory, which, unfortunately, cannot be reconstructed with certainty. It will, however, be argued in line with the opinio communis that both C and to a lesser degree S contain texts revised by comparison with Greek manuscripts at a point or points subsequent to the original composition (which could have been a process) of the OS. Since such historically secondary readings are hard to distinguish from ‘original’ OS readings, for most purposes translation is defined as the last stage of revision according to Greek manuscripts before S and C were copied. Transmission, then, for S and C refers hereafter only to any changes made subsequent to the last comparison with Greek texts.

To claim that the Vorlage Hypothesis has been used too much is in no way to denigrate its use generally. It is and should remain the most significant hypothesis. When we look at large textual units, the reason that the Syriac Gospels correspond basically in the order of their contents to the Greek ones is not related to oral transmission nor to translation technique, but simply to the fact that the Syriac Gospels were translated or revised from Greek manuscripts with this order. At the other end of the scale of size the Vorlage Hypothesis provides a convincing explanation for small textual features such as the text of P in Mark 1:4. Given the choice between ἐγένετο Ἰωάννης βαπτίζων ἐν τῇ ἐρήμῳ and the same words without the article ὁ it seems eminently reasonable to suppose that P’s ܗܘܐ ܝܘܚܢܢ ܒܡܕܒܪܐ ܡܥܡܕ ‘John was in the desert baptising’ goes back to a Greek text without ὁ. What supports this view is the presence of Greek manuscripts both containing and lacking the ὁ. The Vorlage Hypothesis thus may be used to attest a single Greek letter.

The Vorlage Hypothesis’ chief attraction is that if the readings of S, C, and P are translated back into Greek so many of the resultant translations actually exist within the Greek manuscript tradition. But, while it is quite probable that Syriac translations reflect Greek variants no longer extant in our manuscripts, one should avoid postulating many such cases unnecessarily. In particular one should avoid using a translation to postulate multiple lost Greek variants when a consistent relationship can be established between the translation and the extant Greek texts. This is why scholars do not posit a Greek text with καὶ every time a Syriac translation has the conjunction waw. It is a consistent pattern for Syriac translations to add waw, and positing literally thousands of lost Greek readings is unnecessary.

The Translation Hypothesis, on the other hand, though the one championed in this monograph, provides no plausible explanation for many cases convincingly dealt with by the Vorlage Hypothesis. Nevertheless, it will be seen that its explanatory powers, though acknowledged, have still been widely underestimated. This is because mere correspondence between a Syriac and a Greek variant does not prove that the Syriac was made from that Greek text. It might also arise from an independent concurrence of the Syriac and Greek, since not all agreement is due to genetic relationship. Agreement, especially agreement between manuscripts in different languages, can be independent. The sorts of errors to which scribes were prone are by their very nature likely to be repeated. Agreement between Syriac and Greek texts can also be independent if an adequate reason internal to Syriac or the method of a translator can be given. Such an explanation must not be given in an ad hoc way, but must be shown repeatedly to be able to explain the features of the translation. Ad hoc explanations should not, moreover, repeatedly be introduced to explain multiple agreements of different kinds. Where such agreements exist we must conclude that the majority are genetic, even if we cannot be sure of the genetic nature of individual agreements.

This test, which will be used regularly hereafter, needs some further refinement. There is a sufficient mass of Greek manuscripts that a large number of features of Gospel translations might be paralleled somewhere in the Greek tradition. But the question is not whether a conjunction in Syriac can be paralleled in some obscure Greek manuscript, but whether there is any genetic link between the two. It must at least be plausible, therefore, that the Greek variant existed at the time the Syriac translation was made. For this reason, as well as because of the practical difficulties of any other procedure, the variants in the Nestle-Aland Novum Testamentum Graece (27th edn; hereafter NA27) and the United Bible Societies’ Greek New Testament (4th edn; hereafter UBS4), along with the works of Swanson, von Soden, Legg (Matthew and Mark only), and the International Greek New Testament Project (Luke only), have been taken to contain all the significant and plausibly early variants in the Greek Gospels. Where these record no variants it has been assumed that the Greek manuscript tradition is without variant (such minor variants as exist are unlikely to affect the argument). Establishing locations without Greek variants is usually important at the outset of consideration of a particular translation feature. At these points the unity within the Greek tradition has been highlighted and any deviations within it noted. When the united Greek witness has been established, the more frequent and consistent a Syriac deviation from it is, the more plausible the Translation Hypothesis has been held to be.

Though the test of repeated deviation from the united Greek witness is usually enough to establish that variation is due to translation, investigation has not always stopped at merely establishing that a variation is translational. Usually a reason for the variation has been sought. This has often involved leaving the safety of observable data and seeking plausible conjectures to explain the data. These conjectures vary greatly in certainty, but the rejection of the explanation given here for a translational divergence should not necessarily lead to a rejection of the appropriateness of the Translation Hypothesis itself as the right model for the origin of a set of variants.

The Translation Hypothesis is, of course, a model which works best with a set of variants. That is not in any way to conclude that all variants in that set must have a translational origin. It is rather to say that wide application of the Vorlage Hypothesis for the set of variants has become implausible. Explaining a single text from a particular Greek Vorlage has not usually been excluded, only made unnecessary.»