Home • “Cyberwars in the Middle East” by Ahmed Al-Rawi 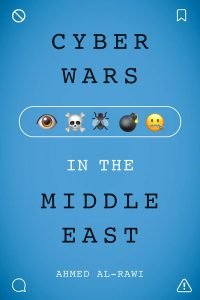 «This book, which deals with cyberwars in the Middle East, considers hacking and other forms of cyberoperations as forms of online political disruption, which is a militaristic and aggressive public communication inherently powerful due to its use of advanced technology and potential influence. Drawing from Kenneth Waltz’s theory of structural realism in international relations and borrowing from Manuel Castells’s discussion of power and counterpower, I developed a model that examines the communication flows shaping our networked world. On the one hand, nation-states, the hacking groups of terrorist organizations, and their affiliates or cyberwarriors represent the hegemonic communication powers, employing hacking as offensive and defensive mechanism toward other nation-states and citizens. Due to their inherent power that is represented by using advanced technological means, this type of communication is considered a horizontal flow of online political disruption. In other contexts, these nation-states use spying tools and surveillance mostly inside their territories as a vertical flow (top-down) form of online political disruption to target political activists and perceived opponents.

On the other hand, independent national hackers and global hacktivist groups stand for the counterpowers, practicing a form of vertical (bottom-up) political disruption as a reaction against corruption and the internal politics of their states. However, we also find examples of a horizontal form of online political disruption when hackers target ordinary citizens for a variety of reasons. In the Middle East and elsewhere, cyberoperations activities are conducted along three dimensions: international, regional, and internal. There will certainly be some overlap along these dimensions because the Internet cannot be confined to one geographical region.

The second chapter of the book discussed the horizontal and vertical political disruption that often involves nation-states’ cyberoperations. Based on the international dimension of the online political disruption model, the third and fourth chapters provide case studies of U.S. and Russian cyberoperations involving and/or targeting the Middle East region. For example, the U.S. Department of State’s Digital Outreach Team (DOT) initiative and other astroturfing online campaigns against terrorism fall within the category of vertical online political disruption (top-down). I argued that the identities of the campaigns’ sponsors were concealed due to the general mistrust in the U.S. intentions in the region, and I concluded by stating that the U.S. astroturfing communication approach was not effective because Arab audiences largely viewed it as miscalculated propaganda.

As for the Russian cyberoperations via political trolls, they were more advanced than the U.S. cyberoperations, especially in microtargeting their Western versus Muslim Arab audiences due to using the affordances of social media. Through a discussion of issues surrounding Islam and immigration, the fourth chapter examined the Russian trolls’ online political disruption where differences in the English and Arabic messages were highlighted. In English posts, Russian trolls mostly associated Islam with liberals and the Black Lives Matter movement. Yet, the religion is negatively presented when far-right groups are microtargeted. On the other hand, the Arabic-language messages do not show the same animosity toward Islam, which is, instead, framed in a positive way. The overall goal of the Russian trolls is to divide, distract, and possibly mobilize audiences, often giving the false impression that these messages are sent locally in a bottom-up approach (grassroots). The reality, however, is that these cyberoperations are international in dimension and conducted using a vertical (top-down) method.

Chapter five focused on regional politics where cyberoperations are situated within the horizontal form of online political disruption. After closely examining the 2017 Qatari crisis, I showed evidence that most Arab countries have either purchased or used offensive cyber measures and surveillance tools to hack their regional rivals and spy on political activists inside their territories. Specifically, the UAE and Saudi Arabia obtained more advanced spying tools and technologies than other Arab countries, but none of them can compete with Israel’s capabilities and to a lesser extent that of Iran.

Finally, the last chapter offered an understanding of a selection of Arab hackers as well as electronic flies and cyber armies, with a focus on the Syrian Electronic Army (SEA). The goal of these cyber armies is to disseminate pro-regime propaganda and attack political opponents, activists, and critics. While SEA was active a few years ago, it became highly invisible in recent years. Instead, the Saudi Cyber Army (Salmani Army) has become the most organized trolling group with the assistance of its former manager, Saud al-Qahtani. Through coordinated and systematic spamming, trolling, and reporting (squishing), cyber armies often succeed in limiting the number of opponent Twitter accounts for short periods of time. These are ongoing cyberoperations that are akin to war skirmishes. For the cyber army members, the outcome of their actions remains unknown but still thrilling to witness. As for independent Arab hackers, we find a thriving DIY online culture that hacktivists engage with to learn how to hack in order to expose government corruption and nepotism. This aspect of cyberwar is waged to create social justice and is theoretically situated within the vertical (bottom-up) online political disruption model.

Finally, I conclude that we have been witnessing an ongoing political disruption in the Middle East region, which corresponds with the current geopolitical developments and diplomatic relations. I also caution that the present cyberwars that are manifested in dif­ferent forms are likely to continue following the evolving nature of spying technologies and the political tension among regional rivals. As long as the political establishments in the Middle East remain the same, online political disruption will not cease.

With the introduction of my cyberwar model, I am hoping that other scholars, experts, and practitioners find it relevant in studying other geographical regions and contexts. In terms of future research in this area, there remain many under-researched aspects, such as understanding the inner workings of political trolls, which can be done by interviewing them. We also do not know much about the possible offline and online outcomes of cyberoperations. Finally, we need to continuously examine and compare other case studies, especially new
ones, to better understand the ever evolving phenomenon of online political disruption.»